Each month the Asian Arts Council presents a program featuring a distinguished scholar, curator, collector or Asian arts enthusiast of note. We meet the last Thursday of the month in the Museum’s Boardroom at 1:00 p.m. and begin with a brief business meeting before the lecture. Meetings are FREE FOR EVERYONE for a while. (Usually lecture meetings are free for AAC members, only $10 for Museum members, $12 for non-members and $8 for students). 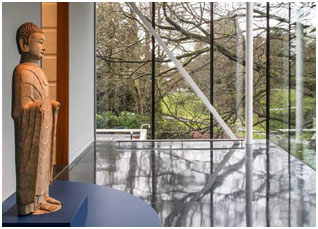 Although the Seattle Asian Arts Museum remains closed, the Curator of Japanese and Korean Art, Xiaojin Wu, provided a virtual tour of the newly renovated galleries. A rethinking of the most effective way to engage viewers resulted in a thematic approach with the galleries organized around themes where works from different cultures and time periods illustrate cross cultural similarities and differences. A gallery devoted to Spiritual Journeys juxtaposed Shinto and Buddhist figures with a multi-armed Hindu Vishnu, 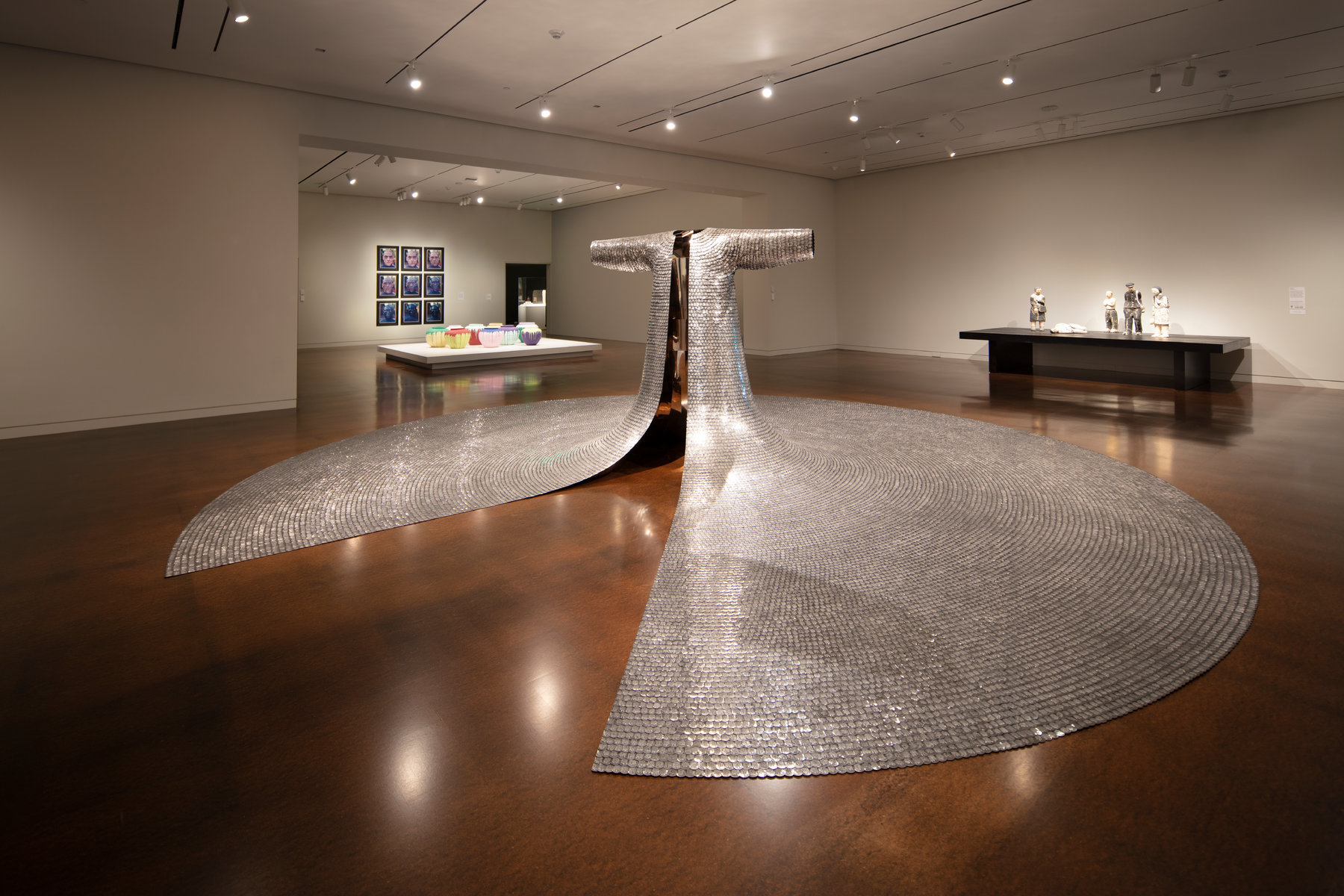 and a Sacred Texts section displayed the text of a Japanese lotus sutra along with a stunningly beautiful page from the Koran written in gold ink on indigo paper.

A favorite contemporary work of Dr. Xiaojin Wu is Some/One, a compelling sculpture by Korean artist Do Ho Suh, made from thousands of stainless-steel, military-style dog tags, and fashioned into an imposing robe flowing into an encompassing circular train on the floor.

Summary from Dr. Wu: After a 2-year renovation and expansion, the Seattle Asian Art Museum reopened to the public in February 2020 with a refreshed presentation of the museum's renowned Asian art collection. The galleries are no longer organized by geography; instead, each gallery presents choice works around a theme, one that is essential to Asian art tradition and culture. This virtual tour offers a close look at the revamped galleries, and also shares the ideas behind this cross-cultural thematic approach for the reinstallation.

The Qing Dynasty (1644-1912) in China was a time of great change and innovation, especially in the field of ceramics. The war and instability that led to the rise of the Manchu rulers of this dynasty left the great imperial kilns in shambles. Several early rulers of the Qing dynasty reinvigorated the ceramic industry. These rulers celebrated both the colorful glazes of several great moments of Chinese ceramic history and fresh approaches to color and glaze technique. Additionally several changes to the structure of the industry allowed innovations to flourish at this time. The result was an elegant array of colorful vessels that are still celebrated today.

Tea Cermony in Medieval Japan: Its Origins and Embodiment of the Senses was presented by Anne Alene, M.A. During the Ashikaga shogunate, the cultural practices of the tea ceremony, flower arrangement and Noh drama were supported by the 8th shogun, Ashikaga Yoshimasa (1436-1490), who built Ginkaku-ji (Silver Pavilion) as his retirement retreat.

It was designed, oriented to the east, for intimate gatherings of moon-viewing, and enveloped by a ‘mirror’ pond. It is surrounded by tranquil gardens with strolling paths, a moss garden and water features, designed to dispel quotidian worldly concerns. Tea was brought back to Japan by monks studying zen (chan) Buddhism in China, who used it in their religious practices and for its health benefits. The tea ceremony was formalized by Murata Juko who promoted the principles of humbleness, respect, purity of spirit, and tranquility of mind as elements of the ceremony which included the ritualized preparation of matcha, an aged, powdered green tea.

He favored the use of Japanese tea utensils and rustic, unglazed stoneware, but advised that they could also be harmonized with Chinese ceramics such as tea storage jars. The aesthetics of wabi sabi became an integral part of the tea ceremony, where wabi represented imperfection, simplicity and naturalism, and sabi represented transience and the signs of wear and aging. The concepts of wabi sabi derive from Buddhist philosophy of the impermanence of all things, and the path to spiritual awakening is in recognizing one’s own imperfect, unfinished nature.

For centuries, the Japanese have expressed and codified their love and reverence for nature and the seasons in their poetry and art. From the 7th century AD, a rich literary and visual vocabulary relating to the Four Seasons (Japanese: Shiki, 四季) evolved, with flowers, trees, plants, birds, animals and entire landscapes representing each season and its associated moods and activities. In this Zoom slide lecture, Meher McArthur will explore how the tradition of the Four Seasons features in Japanese paintings, prints, ceramics, clothing and accessories, using examples from the Scripps College Collection that will be featured in her upcoming exhibition (Scripps College, January 2021) of the same name.

Saito Kiyoshi’s (1907-1997) keen sense of design, superb technique, and engagement with an appealing variety of themes made him one of the best-known and most popular Japanese print artists of the twentieth century. Despite his international success, he referred to himself as a “frustrated painter” and took little pleasure in the medium that he mastered, while his peers scorned him as a “souvenir” artist. This lecture will discuss Saito’s complicated practice and legacy. We first met Rhiannon when she was at the Clark Center. She gave our September 2016 lecture on Visualizing War in Modern Japan: Highlights from the Lowenhaupt Collection at Saint Louis Art Museum where she was Asian Arts Curator. Since 2017 she has been Curator for Asian art at the Center for Asian Art, Ringling Museum in Sarasota, Florida. In 2016, the 25,000-square-foot Ting Tsung and Wei Fong Chao Center for Asian Art opened and includes galleries dedicated to rotating installations of The Ringling’s Asian art holdings, a 125-seat lecture hall, an object and print study room, and open storage spaces to increase public access to the collections. As a complement to the Ting Tsung and Wei Fong Chao Center for Asian Art, a Japanese tea house (chashitsu) was designed and built in the Bayfront Gardens. The Ringling Tea House was designed to marry the traditional tea house with local architectural heritage.

“Sailing to Cathay” explores the vibrant maritime trade routes that existed in what are now known as the Arabian Sea, Indian Ocean, and South China Sea before and after the arrival of Europeans in Asia at the turn of the sixteenth century. Maritime trade routes were the ancient highways carrying commodities, art, ideas, people and religion between Europe and Asia, with an impact felt at both ends. By the middle of the seventeenth century, Chinese porcelain, lacquer, textiles, tea, and more were common exports making their way to the markets of Europe.

"Andrew Singer dreamed about China from a young age and lived there for a year during college in the mid-1980's. He was at one time a Chinese translator with the U.S. government. He has skydived, hiked the Salkantay Trail in Peru, and camped on the Great Wall of China. Andrew writes a monthly newsletter on China, America, and cross-cultural connections. His website is www.andrewsingerchina.com."

Originally a painter trained in oil, Hagiwara Hideo (1913-2007) turned to printmaking in 1954. From the start his prints were of an abstract nature, and for 550 years he was a constant innovator in his choice of motifs, style and technique. With an oeuvre of over 600 different prints, this lecture provides an introduction into the life and works of Hagiwara Hideo. It is held in connection with the first major U.S. retrospective exhibition of Hagiwara’s prints at the Minneapolis Institute of Art.

Andreas Marks studied East Asian Art History at the University of Bonn and obtained his PhD in Japanese Studies from Leiden University with a thesis on 19th century actor prints. From 2008 to 2013 he was director and chief curator of the Clark Center for Japanese Art in Hanford, California, and since 2013 has been Mary Griggs Burke Curator and Head of the Japanese and Korean Art Department at the Minneapolis Institute of Art. He is the author of TASCHEN’s "Hiroshige & Eisen: The Sixty-Nine Stations along the Kisokaido" and "Japanese Woodblock Prints (1680–1938)". His 16th book, "Hokusai: Thirty-six Views of Mount Fuji," will come out in mid-2021.

This talk tells the details of how Ping-Hui Ku curated “The Ambassador Drumright's INK DIPLOMACY” exhibition which is currently on display at the San Diego Chinese Historical Museum. (Temp. schedule: Dec. 5, 2020 to May 31, 2021). Ping-Hui also authored the exhibition catalogue which includes 35 Chinese paintings by 32 famous Chinese artists. The artists gifted most of these treasures to the Drumrights while he was the Ambassador to the Republic of China from 1958 to 1962, and some were given later. Ping-Hui was inspired by studying Chinese paintings at the San Diego Museum of Art starting in 2013. She summarizes her research on the Drumrights' lives related to the art in the catalog.

In this survey of Japanese ceramics from prehistoric times to the modern era, we will see social,religious,and political influences that were expressed in the medium of ceramics during the history of Japan. Examples of wares and works from all three realms of ceramic design and production, i.e. applied, decorative, and fine art ceramics, will show that expressions of both rustic and refined aesthetic traditions remain vibrant today. Heather Simmerman was born and raised in the Chicago area, frequently visiting the Art Institute of Chicago. She earned a B.A. in Biology from Northwestern University and a Ph.D. in Chemistry from Indiana University, then pursued a career in the biotech industry. She is a member of the Museum's Asian Arts Council and a member of their study group, as well as a docent in training at SDMART.

A summary of this lecture will be posted here the month after the lecture is given.