Each month the Asian Arts Council presents a program featuring a distinguished scholar, curator, collector or Asian arts enthusiast of note. We meet the last Thursday of the month in the Museum’s Boardroom at 1:00 p.m. and begin with a brief business meeting before the lecture. Meetings are free for AAC members, only $10 for Museum members, $12 for non-members and $8 for students. 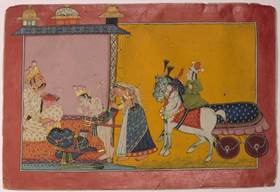 Margaret Zoehrer gave a spellbinding presentation of the centuries-old epic tale of India, the Ramayana, illustrated by many paintings from the Museum’s renowned Edwin Binney 3rd collection.  The Ramayana is one of the two great Indian poems (the other is the Mahabharata), written in Sanskrit and consisting of about 96,000 verses, perhaps between 500 BCE and 200 CE. Although there are several versions reflecting regional influences, it is attributed to the mythical seer Valmiki. Very often compared to the great Greek epic, the Iliad of Homer, it is a story of the recovery of an abducted bride.  Rama's journey or 'travels', however, is much more than a romance or even a heroic conquest, it is philosophy, mythology, religion, and history, containing the precepts of good living within a basic plot of struggle with good and evil. The major themes of karma and duty, spirituality and suffering are told delightfully in a mythical age when Gods, demons, men, and animals embody the ideals of society.

The Ramayana was originally memorized by Valmiki's disciples and passed down through oral public readings. That oral tradition carries on today in India and throughout South Asia. The story is read, danced, acted, and painted. The San Diego Museum of Art has works of art which can tell the story from beginning to end, from northern to southern sources, including pre-Mughal manuscripts, and wood carvings from 18th century chariots.  Recently the museum curated an exhibition of paintings depicting the Ramayana at the Seattle Museum of Art.

David Kahn presented a fascinating glimpse into the dying art of handmade Japanese kites. These handmade and hand-painted kites come in all sizes and shapes, depicting samurai warriors, historical events and mythical creatures. Some of the most appealing are in the shapes of insects or birds. Although some are still flown, they are now mostly preserved for posterity in private collections or museums. 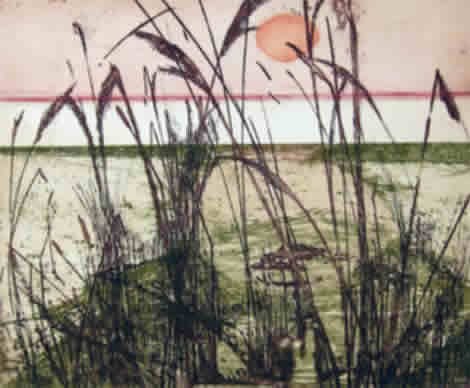 In his presentation Western Prints, Eastern Images, Waynor Rogers highlighted the worldwide fascination with the refined aesthetic of Japan after its opening to the west and the Meiji Restoration of the emperor in 1868. 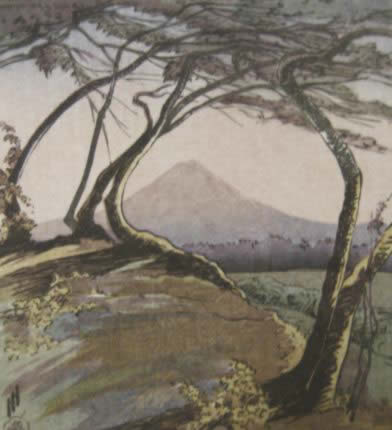 Artists were drawn to Asia, and Japan in particular, in the late 19th - early 20th century to study and work. He illustrated the works of Helen Hyde an etcher and printmaker who studied with Kano Tomonobu in Japan; Charles Wirgman, an Englishman who taught Western art in Japan; Bertha Jaques who traveled to Asia and founded the Chicago Society of Etchers; Mortimer Menpes, Australian born etcher and protégé of James McNeill Whistler; Lilian May Miller, born in Japan, a versatile artist who carved and printed her own blocks; Paul Jacoulet, French, lived mostly in Japan where he was recognized as a master of the woodblock print medium; Charles Bartlett, English had several series of woodblock prints published by the influential Watanabe Shozaburo. [Reflections, Charles Bartlett, Mt Orizaba, Helen Hyde] 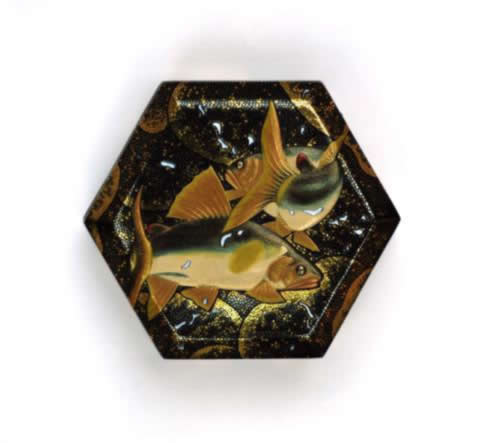 Clo Pazera, Curatorial Assistant at the Clark Center for Japanese Art, presented an informative, illustrated lecture on Japanese lacquerware. Lacquer is the sap from the urushi tree, indigenous to Asia, which is transformed into objects of beauty and durability through a painstaking and time-consuming process. After filtering and boiling the sap, it is applied in thin layers over a wood core in the shape of the finished product. Drying the object in a temperature-controlled room between applications results in a hardness and durability that is water resistant. Many delicate and beautiful effects are created by sprinkling finely ground metallic powders on the surface, applying gold leaf or inlaying mother-of-pearl or other materials. Although the lacquer is clear, it can be colored with lampblack (soot) to produce black, cinnabar to produce vermilion, and lead chromate to produce yellow. It is believed the urushi tree and the lacquer techniques were introduced to Japan from China along with Buddhism as many Japanese Buddha images were produced using lacquer. The broad range of Japanese lacquerware objects includes writing boxes, trays, tea caddies and tea cups, inro, and even samurai suits of armor.

Our Heritage Luncheon was a spectacular success with a total of 105 reservations and another successful Silent Auction and Cash & Carry, giving us a net for the Luncheon and Auction of $7,421.53! Thank you to Laurel Holloway whose determined efforts culminated in the outstanding performance by Kojiro Umezaki, truly a treat to be savored.

Hollis Goodall, Associate Curator of Japanese Art at LACMA presented The Supernatural Japanese Art, outlining the long history of ghost stories and the depiction of demons, wraiths   and shape-shifting animals and ghosts.  During the Edo period (1603–1867), a literate populace and a prosperous merchant class brought about a market for wood block prints illustrating popular ghost stories such as The Procession of 100 Demons.  The concept of the encyclopedia was adopted from China, but it included descriptions of demons and mythical creatures as well as actual animals.  Many of the great artists such as Katsushika Hokusai, Utagawa Kuniyoshi and Tsukioka Yoshitoshi produced vivid depictions of supernatural creatures and their vengeful exploits. [Utagawa Kuniyoshi, Mitsukini Defying the Skeleton Spectre] 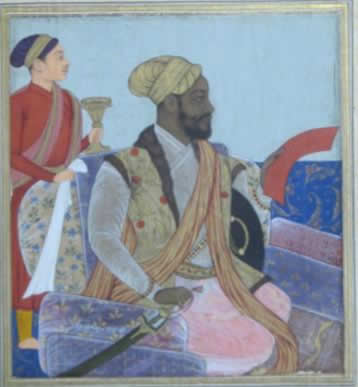 Our Associate Curator of Southern Asian and Islamic Arts, Marika Sardar, PhD, presented Portraits of Africans in India, providing a glimpse into some of the differences between the Deccan courts in the south of India and the Mughal courts in the north. The land and sea trade routes brought slaves to India from Ethiopia. Some of the most capable and talented of them were able to rise to positions of high rank, even serving as generals and ministers in the courts. A weak hereditary system of succession in the courts of the Deccan allowed some to become rulers. There are about 20 – 25 known paintings of such men who were often portrayed in the same manner and dress as the royal sultans. Unlike Mughal albums, Deccan albums included not only portraits but also ornate calligraphy, lines of poetry and beautiful marbling of the paper. [Ikhlas Khan with a Petition, SDMA 1990.442] 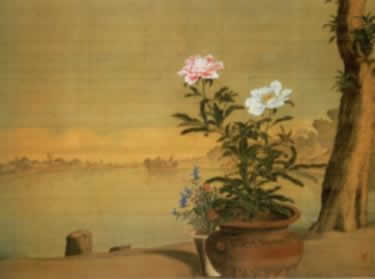 Dr. Johnson traced the roots of Western style paintings in Japan which developed in two different phases. The first phase was influenced by Christianity during the 16th and early 17th centuries. Adventurous Portuguese traders had found a route to Japan in 1543, and Jesuit missionaries established seminaries. The Japanese artists who produced Namban or “Southern barbarian” art were Jesuit-trained seminarians whose subject matter was influenced by the Portuguese. The painting style included religious and secular subjects such as saints or knights on horses, and there was great interest in portraying the colorful clothing of Westerners. These were often copied from European engravings rather than original compositions. Although these artists were good copyists, there was a lack of stylistic innovation and their paintings continued to use a traditional Japanese flat style and ambiguous light sources. The second phase occurred after Christianity and all foreigners except the Chinese and the Dutch were expelled from Japan in the early 17th century. The Dutch traders were limited to a small man-made island, Dejima, in Nagasaki Bay. Although all religious materials were forbidden, rangaku or Dutch learning in the form of medical and scientific books were welcomed. In this second phase, akita ranga was a Dutch-influenced style of painting practiced by the samurai class who painted Japanese subjects, but employed Western techniques such as a low horizon line, reflections in water, and often a large object in the foreground to emphasize use of perspective. Neither school began as a new art school. [Odano Naotake, Shinobazu Pond]

In April we were transported to the beautiful and tranquil Portland Japanese Garden by its Curator of Culture, Art & Education, Diane Durston. Within its 5½ acres, there are five different styles of Japanese garden. The strolling pond garden, originating in the Edo period (1603-1847) to elicit some distant place, has an upper and lower pond connected by a flowing stream.

The raked gravel of the sand and stone garden, often associated with Zen Buddhist monasteries, is meant to evoke mountain landscapes or the waves of the sea. The tea garden’s winding path allows one to shed daily cares and enter the tranquil space of the tea house ready to share the friendship offered in the tea ceremony. The flat garden combines the dry, raked garden with clipped shrubbery and trees to provide a picturesque landscape to be viewed from the pavilion. The natural garden is a contemporary style that allows local plant materials as well as those traditionally used in Japanese gardens. In addition to the five gardens, Ms. Durston described exhibits of art by Japanese artists presented in a garden pavilion which have included a Living National Treasure, Isamu Noguchi and an inspired exhibit combining the traditional art of the indigenous Ainu of Hokkaido and the Native Americans of the Pacific Northwest.

May 29 - 1:00 p.m. Of Pigs and Palaces: The Story of Porcelain Meher McArthur, Independent Asian Art Curator, Author and Educator

Of Pigs and Palaces:

The Story of Porcelain will be presented by Meher McArthur (whose lecture on Confucius enlightened us several years ago). She is a freelance Asian art historian and former curator at the USC Pacific Asia Museum, born in India, raised in the U.K. and educated in Japan and Cambridge University. She has authored numerous books and publications, most recently a book on origami in conjunction with a traveling exhibit which she curated. For this lecture, she will trace the origins of porcelain in China, the styles produced for domestic and foreign patrons, and the related wares of Korea and Japan.

San Diego Museum of Art docent, Jim Richter, elucidated the differences between the appearance of a bodhisattva and a Buddha. He explained that a bodhisattva is a deity that is worshipped by Buddhists, particularly in Mahayana Buddhism. The bodhisattva has completed the rigorous steps to achieve enlightenment, but chooses not to go on to Nirvana. He/she instead remains on earth to assist other sentient beings who also wish to achieve enlightenment. The Asian art collection of The San Diego Museum of Art contains many examples of bodhisattva images from nearly 2,000 years of history. They come from India/Pakistan, China, Korea, and Japan. Our artwork includes representations of many different bodhisattvas, such as the bodhisattvas of compassion, of wisdom, of power, and of perfect Buddhist practice. The artistic styles vary with time and place. Jim’s presentation showed the various bodhisattva objects from the Museum’s collection that are currently on view, and described their origins, artistic styles, and meanings.